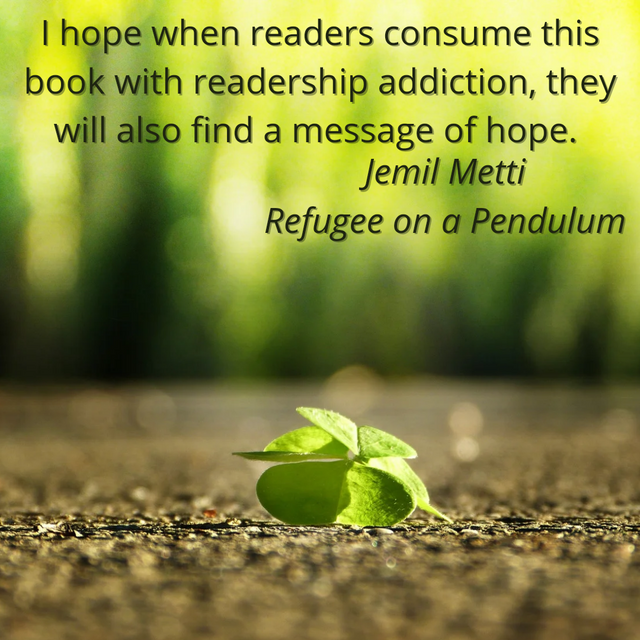 Today's Chat with Sarah features Jemil Metti author of Refugee on a Pendulum.

My writing process starts with a subject that hacks my curiosity, but one I know little about. That's when research kicks in. I also spend most of my pre-writing phase of this process outlining with small sketches that help to give me a sense of place, time, culture, motivations. When I was a full-time educator hustling and preparing for secondary and college students, it used to take me a year and a half to finish writing a single novel. That time now has been cut in half, thanks to one amazing step we take in our advanced years in life we call retirement.

2. What's one of your interesting writing quirks?

There's a direct correlation between location and writing quality. Our deepest commitment to our craft does not absolve us of the social, cultural or environmental influences all around us. With me it's cafes. I have no idea why my writing has picked up an addiction to human energy, whether it's a crying baby, arguing teenagers, or spousal rivalry inside one of our nationally known cafes; among them Barnes & Noble, Starbucks, and Panera's Bread. They provide the essential fuel I need to run with my imagination in search of possibilities.

3. What's your favorite and least favorite part of the writing process?

Outlining and researching top the list of my favorites because their literary friendships act like barriers against writer's block. My least favorite is waiting for the publisher to inform me whether or not my book was accepted for publication. Any time I want to write, I am worried about a previous project that's being considered for an award. All that waiting we have to put into the process like for a phone call from a movie producer can be cruel and unusual punishment.

4. Let's discuss your book Refugee on a Pendulum. It takes place during the 2014 Syrian Civil War. Why this setting?

This was roughly the period when the Syrian Civil War started. I felt the urge to address a common global concern for one question in particular: Why are they always fighting to the detriment of the Syrian people? I tried to portray perpetrators and villains on both sides of the religious and ideological divide. I hope when readers consume this book with readership addiction, they will also find a message of hope.

5. The reviewer says that the book "poignantly describes the dramatic consequences of military, religious, and political turmoil on the lives of ordinary people." How much research did it take to make the book so realistic and plaintive?

Whenever I run into an important discrepancy about an incident that happened a long time ago, but it's being disputed without credible evidence in the press, I can often find answers from the NGOs; non-governmental agencies that are usually apolitical; all they're interested in are the facts. Global agencies like Amnesty International, Human Rights Watch the United Nations (U.N.). Sometimes when we involve the human element, reporters who regularly cover the area I am writing about can be extremely helpful. Many times, they'll even share their sources.

7. Which character was the most difficult to write and why?

Dr. Sabah Putrus was the most difficult character because he was self-conflicted, despite his high level of intelligence. Multi-gifted yet he allowed himself to get drifted in situations he could have avoided. He knew enough about Hamdia Qubbani not to get involved in any kind of relationship that would be doomed to failure from the outset. He didn't always exercise sound judgment even though he was quite capable of resolving work-related disputes in his medical capacity, as both surgeon and division administrator.

8. What's next for you? Any upcoming novels?

I've done enough research for my fourth novel. It starts in Yemen that's been in the thick of its own civil war, and most of the world doesn't even know about it.

9. While you're writing, is there anything that you use for inspiration? Music? Art? A favorite view?

Yes, I listen to classical music. I actually turn to another neutral computer and play a game of chess. Despite its obvious superior intelligence programmed by the best minds in the game, I have beaten it a few times!

10. If you could invite any three people to dinner, living or dead, who would you invite?

There's no such thing as failure in the negative sense if you learn to treat it as your coach. But, that can only happen when you allow yourself to learn from your failures instead of allowing them to overwhelm you. That's actually a good thing.

12. What's the longest you've gone without sleep and why?

I literally stayed up all night at one of my cousin's first communion while living in Iraq.
Good books, like good friends, are few and chosen; the more select, the more enjoyable.
-Louisa May Alcott
Latest Review: Up to the Toys by Sis and Mis
Top

Wow...a year and half years on writing a novel..that far too long...that means writing novels is based on determination and hardwork.
Latest Review: I Know My Way Memoir by Theresa Marafito with Linda Odubayo Thompson
Top

What an interesting interview! It clearly shows how important is research in writing a book.
Latest Review: God is a Verb by Lynn Keller
Top

Thank you so much for this interview. Many of us struggling between the passion and time management. But the way Author has cut down the time from year to half, much appreciated! Outline the book and building the character is most interesting and enthusiastic journey. God bless!
Latest Review: Solaris Seethes (Solaris Saga book 1) by Janet McNulty
Top

Wow amazing, a year and half years on writing a novel, this means writing a novels is based on determination and hard work all the way through to the end. I really appreciate this work
Top I think that researching and subsequently writing about a topic that you are not familiar serves as an example to us all. Feeding your curiosity, so to speak. Nevermind the tale about the cat that got killed

What an interesting interview
Top

Very eye-opening interview into the life of the author
Latest Review: R.e.s.t The parable of the butterfly by Carrie Lorene English
Top

Wow! Such an amazing interview. Hats off! It clearly shows how important in research in writing a book. Gread job
Top

I like how the author feels more creative in a cafe, surrounded by people and their actions.
Latest Review: E M P Honeymoon by Dorothy May Mercer
Top Such an open interview. I can feel the calmness of it, thank you for this!
Latest Review: Ironing by Navajo
Top

Wow I love the way the author sketch things out to give him good idea on what to write. This is very good method of writing
Latest Review: I Know My Way Memoir by Theresa Marafito with Linda Odubayo Thompson
Top